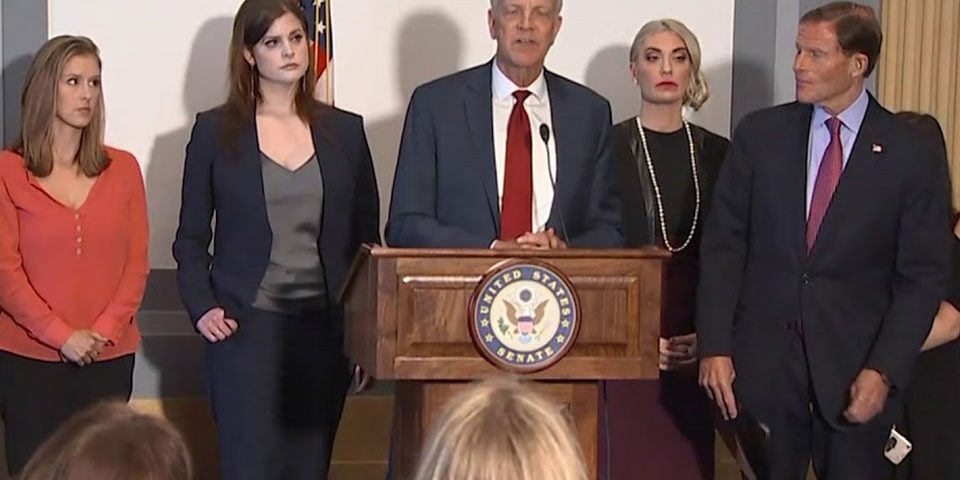 “In a Senate subcommittee hearing in April of 2018, I said, ‘For many children it is impossible to disclose molestation or rape, because we do not, and they do not have the vocabulary. I did not learn that [at 15 years old] being molested by a 33-year-old man was a crime until I was at Cornell University. I was 27 years old.’

“Today I celebrate a breakthrough in the effort to stop child sexual abuse, especially in sport.

“Survivors of child sexual abuse within the Olympic movement are finally being heard with the introduction of the Empowering Olympic and Amateur Athletes Act of 2019. It is the first of many steps toward ending the status quo within the U.S. Olympic and Paralympic Committee.

“I look forward to bipartisan support on Capitol Hill to address childhood sexual abuse, both inside and outside of sport. The time is now to stop childhood sexual abuse and exploitation. 1 in 4 girls and 1 in 6 boys across this country are sexually abused prior to reaching the age of 18. I extend my sincere thanks and gratitude to Senators Blumenthal and Moran for their leadership on this issue.”

Bridie Farrell is an advocate on behalf of survivors of childhood sexual abuse and exploitation. She is a frequent commentator in the media and a distinguished speaker about issues related to child abuse.

Ms. Farrell was a nationally ranked speed skater by age 13. She competed in the 1998, 2002, 2006, and 2014 Olympic Trials, was a member of the US National Speed Skating Team, and held three American records.

Beginning at age 15, Ms. Farrell was sexually abused by speed skating teammate and Olympic silver medalist Andy Gabel, then 33. In 2013, 16 years after the abuse ended, she disclosed the trauma she endured on National Public Radio. Gabel subsequently acknowledged that he had engaged in an “inappropriate relationship” with an athlete who was not yet 18.

In 2017, Ms. Farrell founded NY Loves Kids, a nonprofit focused on supporting and advocating for survivors of sexual abuse and exploitation. A top priority for Ms. Farrell and NY Loves Kids was passage of the Child Victims Act in New York State, legislation to extend the statute of limitation for survivors of child sexual abuse, thereby allowing victims to seek access to a justice system from which they had previously been time barred. In 2019, the Child Victims Act (CVA) passed the New York Senate and Assembly and signed into law by New York Governor Andrew Cuomo. Building on the success of NY Loves Kids in New York, Ms. Farrell is continuing her advocacy, as a grantee for Zero Abuse Project, across multiple states and throughout the country in an effort to support survivors of sexual abuse and exploitation.  As a result of her advocacy, both Arizona and New Jersey recently passed into law versions of the CVA with overwhelming bi-partisan support

For more information on this issue, please Contact Us.